Re-printed with the permission of Mark Swaby, Victoria, Australia. For complete details please visit his website at

In Mark Swaby's words .......... I have been giving a quantity of historical information about the Victorian Railways Casey Jones cars so I have decided to devote a page to them as my offer to pass the data over to another site was not taken up. Victoria is also my home state so I really should not ignore my own heritage. 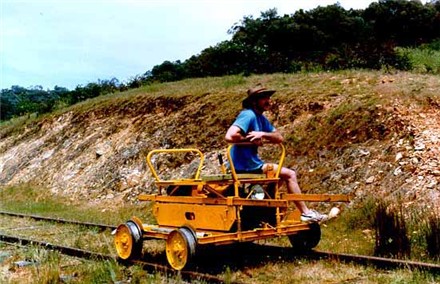 The car pictured is an example of a plagiarized version of the 'Casey Jones' model 531 originally built by the North Western Motor Company, Eau Claire, Wisconsin USA and fitted with a 4hp ball bearing 2 stroke engine and T model holly carb. These and the larger model '521' were mass produced in 63" gage by the Victorian Railways at their Spotswood workshops, located in suburban Melbourne, here in the State of Victoria, Australia

They were locally known as Kaseys.... guess the change of the 'C' to 'K' to protect the plagiarism. The 4 hp version was called the 'KS' model (S for small) and the larger 6 hp versions were known as 'K' models.

The only manufacturing changes VR made to the '531' 4 hp model was the fitting of different lift handles and chain driven reversible magneto bolted to the side of the block...the rest was identical to the original model. I note that due to the expansion of the block the magneto chain tension had to be adjusted whilst the block was hot. If you adjusted it cold the chain would go over tight when the block got hot and jam the timing reverse disk throwing out the timing.

The '521' 6 hp model had a number of changes which included replacing the wooden body with steel, wheel guards similar to the 531 model and locally cast wheels unique to VR. It also employed a chain driven magneto.

The 521 or 'K' type was also manufactured by the Victorian railways in 42" gauge with examples finding there way to Tasmania and reportedly but not as yet confirmed the central Australian 42" system. The 6hp engine from this model was also fitted in some of the QR Northgate Fairmont body's from new. It is good chance that the engines were manufactured by VR.

The recommended oil mix for these was 20:1 and with 40 grade SAE oil. Pre mixed 2 stroke gas was sent out from the Newport Oil stores to the field, a practice I note also in place by NSWGR for their cars. The 'K' and'KS' were the mainstay fleet of the Victorian Railways for over 50 years from the late 20's and some were still in service till the 90's.

VR had a strict maintenance regime for these cars with a detailed card system for every unit. They were regularly sent to Spotswood workshops for overhaul and rebore. The engines carried a brass tag detailing the O/S cylinder and Crankshaft > the tag would be punched with a small circle with the next size the engine was bored out too. The 15 over sizes available being embossed on the brass tag. An 'X' would have to be stamped over the old size circle. Spotswood Workshops even had a dynometer to test the engines after a major overhaul.

Individual engines were not unique to individual cars. Every time a car came in for an overhaul an engine from the overhauled pool was fitted to the car with the original engine repaired and added to the pool.The history cards also reveal that the cars were pooled as well so more than likely you would receive an overhauled car as a direct replacement rather than having your original car back. Some cars have resided in all four corners of the state during their life of service with the VR.

Later upgrades saw both models fitted with 9 HP Wisconsin engines and a two way Granite State Machine Co gear box but still using the wooden centered wheels on the smaller models. The 'KS was renamed the '6W' and the 'K' the '8W' - the 'W' for Wisconsin as was common practice by the VR.

There are still a couple of original imported engines around with the 'Casey Jones' name cast on the Water Jacket.

Not to be reprinted in part or whole without consent
More data coming..Stay Tuned
©TFHL Mark Swaby - All Rights Reserved.
Back