King Midget is an exceptional automobile. It was billed as both "World's Number One Fun Car" and "World's Most Exciting Small Car". Many people still believe it is. These people, and countless others, helped King Midget establish an important and significant niche in the annals of automobile history.

The automobile celebrated its 115th birthday in 2001. Among all automobiles ever manufactured, throughout the world, King Midget holds one untouchable record. King Midget was the only small car continuously manufactured for nearly a quarter of a century; from 1946 until operations ceased in 1970. In addition, Midget Motors Corporation was the sixth largest automobile manufacturer in the United States for a number of years.

King Midget featured it's own uniquely designed automatic transmission at the same time the majority of larger manufacturers began introducing automatic transmissions to the public. It offered incomparable fuel economy. Midget Motors' use of aircraft lightening techniques and unit body construction resulted in a strong, light vehicle years ahead of its successors.

The evolution of King Midget began in 1946 when Claud Dry and Dale Orcutt, who met while civil air patrol pilots during World War II, conceived King Midget as an inexpensive, affordable car that anyone could buy. They developed and sold King Midget as a single passenger kit car in which any single cylinder engine could be installed. The kit contained the frame, axles, springs, steering mechanism, dimensioned patterns for the sheet metal, which could be fabricated by a local metalsmith, and an assembly book. In the late 1940’s, and through 1951, the Model 1 became available from the factory as either a kit or as a fully assembled car with a 6 h.p. Wisconsin engine. 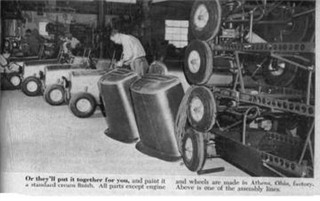 Sales of Model 1 King Midget kits augmented two other ongoing Midget Motors businesses: The MIDGET MOTORS Directory and Midget Motors motor scooter manufacturing and sales. The Directory was a bi-monthly booklet which advertised government surplus materials, like wheels, tires and bearings, along with used engines of different make and size. Midget Motors manufactured the Super-Cycle motor scooter. It came in two models: the Deluxe and the Highway-Master. The Deluxe was powered by a 2 ¼ h.p. engine and it would go about 35 m.p.h.; the Highway-Master, a 6 horsepower model, cruised comfortably about 45-50 m.p.h. Both of them would carry two people and had a built-in package compartment. Directory and motor scooter sales continued into the early sixties as King Midget became the primary Midget Motors product.

By 1951, Dry and Orcutt had developed the second model King Midget, a two passenger convertible offered either fully assembled or as a kit, powered by the 7.5 horsepower Wisconsin AENL engine. This model firmly established King Midget's reputation and incredible ability to perform extraordinary feats. It could carry more than its own weight, it could pull exceptionally heavy loads, it had the agility of a mountain goat; all over arduous terrain with durability and economy for thousands of miles. It began as the 500 pound car for $500. The Model 2 King Midget was a basic vehicle with a hand start cable on the left, outside behind the seat. It had a black three spoke steering wheel, brown plastic seat upholstery, no speedometer and no reverse. However, it was this model which first offered the optional automatic transmission, reverse, electric starter, shatter proof safety-glass tinted windshield, top, steel winter doors with sliding Plexiglas windows, hot air heater, speedometer, turn signals, hand operated controls for handicapped persons and the golf model, complete with two golf bag racks, extra wide traction tires on the rear, special low gearing, foot rests on the front fenders and an extra quiet muffler system. The Custom model was introduced in 1955, along with the standard model King Midget. The Custom got a new two spoke white steering wheel, bright red and bone white upholstery, chrome bumper and cowl parking lights. New Philippine mahogany doors and winter enclosures became standard for both models, too.

King Midget came in one color, California Cream, unless you paid $10 extra. By 1955, the standard color was Peace Rose Cream and later became bone white. These, and later, paint colors were the same as used by Ford Motor Co.

Sometime in the 1950’s, Midget Motors developed the King Midget Junior and, later, the King Midget Trainer. Neither had a body; that was left to the imagination of the owner. The Junior had an overall width of 32 inches. Wheelbase is adjustable at either 42 or 47 inches. Overall length then is 67 ½ inches or could have been cut down to 60 inches with the shorter wheelbase. It has a raised tubular steel frame around the front and rear, and fenders over the wheels. Both models have square tubular steel frame construction. The Trainer is larger and doesn’t have the raised steel frame around the front. Its overall width is 35 inches with a 50 inch wheelbase and overall length of 72 inches. The Junior was powered by a 2 ½ h.p. Briggs & Stratton engine; the Trainer a 3 h.p. Briggs & Stratton. They both had an automatic clutch with a geared, reverse transmission in the drive train. They were discontinued sometime in the early sixties.

Dry and Orcutt introduced the Model 3 King Midget in 1957. The basic body design of this model was used through the end of production. Other significant changes included unit body construction, with the frame and all fixed body components welded together for strength, four wheel hydraulic brakes, and 9.2 horsepower.

As time progressed, other improvements evolved. The Philippine mahogany doors were replaced by aluminum doors and, near the end, steel doors. The electrical system was upgraded from 6 to 12 volts in 1961. The old standby Wisconsin AENL engine was replaced by a 12 horsepower Kohler K301 engine in 1966. The clicker low speed pulley was replaced by a silent Borg-Warner one-way clutch in 1967. The brown canvas top was replaced by a vinyl covered black or white top. An optional electric windshield wiper was offered, along with a windshield washer, radio, carpeted panels, floor mats, safety belts and new paint colors: Corinthian white, Rangoon red, yellow, blue and aqua.

Throughout its history, King Midget was manufactured under the stewardship of only three groups of people. Claud Dry and Dale Orcutt first sold King Midget as part of their Midget Motors Supply operations in Athens, Ohio. By 1948, they began to use the name Midget Motors Manufacturing Co., too. In about 1956, Dry and Orcutt changed the name of their company to Midget Motors Corporation. In 1966, a group of investors bought Midget Motors Corporation and Joseph C. Stehlin, Jr. became president. The company’s financial fortunes declined, and in 1969 its assets were sold to Barthman Corporation, led by Vernon D. Eads. Eads tried desperately to revive King Midget. He designed and built the King Midget commuter, a molded fiberglass bodied, dune buggy type automobile, for an American export show and eventual production. He attempted to start a licensing operation in both Florida and Canada. A fire at the fiberglass plant destroying 13 bodies and the mold, monetary costs of the required new Federal crash test program, and diminishing demand for the automobile, caused Eads to stop making King Midget. Ironically, Eads as a college student, had worked as a consultant for Midget Motors during development of the second model. Eads' long-standing interest nurtured the hope that he one day could again build King Midget.

After production stopped, King Midget Parts Co. was formed in Dayton, Ohio to continue to provide parts support. It was operated by Eads' sister Vivian and her husband, Bob Craven. Bob had worked hard with Eads during the last months of production to improve assembly processes and factory output. Unfortunately, those successful efforts were to no avail.

In 1980, John Weitlauf, of Dayton, Ohio, bought the parts which had come from the Florida licensing operation. They had all been in storage for 10 years. Weitlauf’s sales to owners also provided King Midget parts support.

In 1985, Dave Stults, of Westport, Indiana, purchased Weitlauf's remaining parts. In 1988, he bought the Craven's parts, and, from Vernon Eads, all rights to Midget Motors, King Midget and King Midget Commuter. In 1990, he bought the remaining Canadian licensing operation parts from Brian Coleman and Bob Cook of Hamilton and Binbrook, Ontario. Stults, having amassed all the King Midget parts he could find, provided owners with parts, advice and support through his King Midget Auto Works store and mail order business. Dave owns several King Midgets, including the last one produced.

In 1995, Alan Conley, of Waverly, Ohio, purchased all of Stults’ parts and all rights to Midget Motors, King Midget and King Midget Commuter. He changed the name of the business to Midget Motors Supply. In addition, Conley expanded the number of parts available by either making them himself or getting someone else to manufacture parts no longer available. Conley performed King Midget restoration work, too, turning many a rusty hulk into a beautiful auto once more.

In 2001, Mike Beebe, of Norwalk, Ohio, bought all of Conley’s parts and all rights to Midget Motors, King Midget and King Midget Commuter. He’s named his business Midget Motors and has announced that he harbors hopes of building a Model 4 King Midget one day.

This is a brief historical perspective of the fascinating little King Midget and the other products manufactured and sold by Claud Dry and Dale Orcutt. We believe every vehicle of historical significance deserves a champion; a steward to promote and support it. Since the factory closure, a great deal of gratitude is owed the Cravens for providing that role, coupled later with the efforts of Weitlauf and Bill Hossfield, of Ringwood, New Jersey, who started and operated the first King Midget Registry for fifteen years. Dave Stults followed by organizing the first ever King Midget Jamboree in Westport, Indiana in 1991, for supplying the fullest parts support and information for King Midget from 1986-1995, and initiating the actions necessary to start this International King Midget Car Club. Alan Conley has the largest collection of King Midgets in existence and has made a major contribution by getting more King Midgets on the street so that they may be enjoyed by both their owners and the general public.

There are no records to indicate how many King Midgets were made, nor how many exist today. Both Dave Stults and Bob Vahsholtz have tried to assimilate as much information about King Midgets as they can, including auto serial numbers, so that a best guess can be made about the number manufactured and a fairly accurate number still existing. Nearly every week, another car becomes known. Vahsholtz, as a young designer, aided Midget Motors Corporation, by mail, in design of the Model 3. He takes great pride in his contribution to King Midget. Dave Stults continues his desire to be King Midget’s strongest advocate and still
operates the King Midget Registry. You can reach Dave at: Dave Stults, P.O. Box 549, Westport, Indiana 47283, (812) 591-2719.