We carry all the parts for the various models of solid state distributors used on Wisconsin and Continental engines. For testing and troubleshooting information go here.

While there has been a variety of manufacturers who have supplied point ignition distributors to Wisconsin over the years we are fortunate that there is only one supplier of solid state units making parts identification easy. For all parts and compete units contact us with your engine model and tell us if your distributor is top mount or side mount (see explanation below).

If you cannot find an engine model here are some tips for identifying what solid state ignition (ssi) distributor you have.

First to visually identify that you have a ssi unit all distributor caps have a "vent" which looks like a fifth spark plug wire tower. This vent can be found formed as part of the cap and sticking up between two of the spark plug wire towers in the cap. Also the part number of the distributor is on the foil tag on the distributor body. See pic below. The word "Perlux" is usually found cast as part of the cap on the outside of the cap between the coil wire tower and the spark plug towers. All caps are "black, clip on". A quick rule of thumb for the most common point ignition distributors is the Prestolite units caps are "black, clip on" and Colt distributor's caps are "white, screw on".

1) For two cylinder inline configuration such as the models THD and TJD we need to know if the spark plug wires on the cap are positioned 90o apart or 180o apart. This completes what we need to know to correctly identify what model ssi distributor you have.

2) For two cylinder engines that are of "v-twin"configuration all we need to know is that it is a "v-twin" and this completes what we need to know to correctly identify what model ssi distributor you have.

All distributor caps, rotors, modules,magnet assemblies and dust covers are the same for all four cylinder models except the odd firing VE and VF4D engines which are all fairly obsolete. We will cover those later.

If you require a complete replacement distributor for the models VH4D (30 hp), W4-1770 (35 hp), VG4D (37 hp) and V465D (65.9 hp) all we need to know is if the distributor is mounted up in the "V" of the engine block driving off the governor gear or is it mounted down on the side of the engine near the engine base. This is because the distributor shaft and housing is slightly longer for the top mounted units. They are not interchangeable. An exploded view of the various components is shown below. 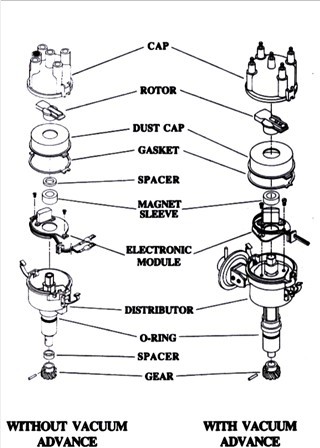 Once you have determined which engine model and unit you have contact us for parts availability and pricing. We strongly suggest you also review the warnings detailed in our service bulletin on what type of things can cause the modules to fail prematurely.

We have complete distributors available to replace most Wisconsin models.